While the method of teaching university music in Iran is not necessarily the best method, this effect is beyond the personal knowledge of this group and a bold attempt to set aside the do's and don'ts of this educational system. The diversity of the composers of this work is due to the concern of discovering the identity related to this land, along with the preservation of originality. Something that invites the listener to think about the difference between these pieces and all the works presented in the last 15 years.
To be contemporary means to rediscover axioms without repetitive letters; This passage is a moment in which the re-reading of words is an excuse for the originality of tomorrow.
.
A three movement string quintet , published as a track of the album named Kāshefān-e Forutan-e Fard (music collection of Iranian contemporary composers )
Violin I: Hovhannes Mokatsian (Frankfurt Symphony player
Violin II: Samuel Barseghian(Lisbon Philarmonic player)
Viola: Jemma Abranhamyan(State Solist Ensemble Yerevan player)
Cello: Aram Talalian (
Contrabass: Simon Hayrapetyan ( Armenia National Chamber Orchestra player)Recorded in Yerevan. Center for the Arts, October 2009
Published by Beethoven Music Center, Tehran, 2016

In the first movement of this string quintet, Determined , the motives are wandering till the con-legno beat on the string put ends to it.Then in the second movements ,Awakens the sardines among the strings ,pictures the dark &  misty atmosphere .The last movement, Farewell is the fighting between two melodies which both are determined and restless. 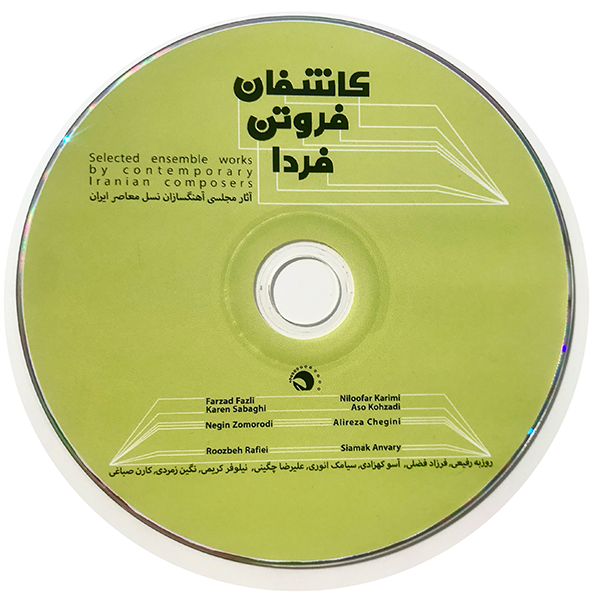